Starting out from Plymouth, our first overnight stay was in Ashford before catching the Dover – Dunkirk ferry from there we drive along the french coast into Belgium and down into Luxembourg, where we met up with Colin & Steffi on the Saturday afternoon -as they had taken part in the MGCC Luxembourg Ardennen Meet (special thanks to MGCC Luxembourg for making Lin & I so very welcome and allowing us to join in for their Saturday night Dinner).

Sunday morning, after a good breakfast, we set off on what I think was the longest journey of our trip – Clervaux, Luxembourg across Germany to Prague, Czech Republic with glorious sunshine all the way, arriving in the old part of Prague mid afternoon for a two night stopover, and raising the our regional Register banner before departure.

Our next drive was from Prague to Fusch an der Grossglockner in Austria, but plenty of time was made on this trip so we decided to drive the Grossglockner, from south to north – stopping at the top for a quick photo, only to be photo bombed by Colin.

The following morning the weather had turned against us with mist and light rain in the valley, which got heavier as we ascended the Grossglockner Alpine road. A photo opportunity had to be taken at the Biker Point at the Edelweiss Peak at an altitude of 2,571 metres  – by this time the rain was torrential, but the D&C banner had to be raised, hardly surprising that no one offered to get out of the cars to help me.

From the Grossglockner, our journey took us down into Italy, arriving in the Dolomite region in time for lunch, after Italian hospitality we continued to Stelvio for a good nights rest at the Franzenshöhe Berghotel in the heart of the Stilfserjoch National Park, before our drive up the Stelvio Pass and another opportunity to 'fly' the banner for the Register and the D&C region.

After Stelvio we continued through Italy and what has to be the longest tunnel I've driven through – highly recommend the Milltek exhaust :-), arriving in Liechtenstein for the night, before driving up through Germany to join Michaels 4th Niederrhein Tour, ….it was on his excellent tour that I realised that being a  photographer can be dangerous.

A total of 3134 (faultless) miles in our MGF & Steffi’s TF and we all absolutely loved it. 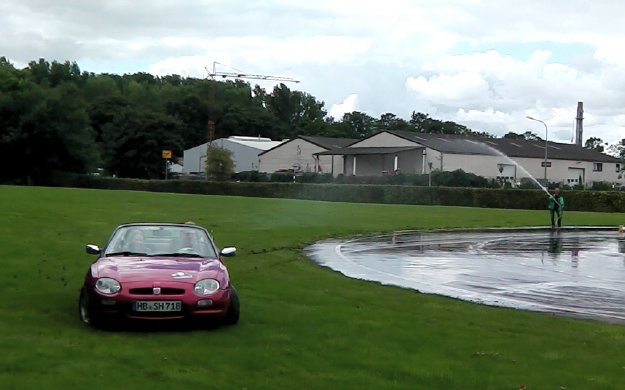